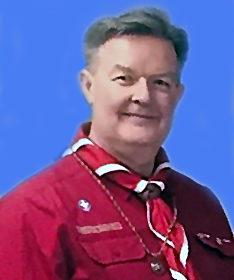 It is my sincere pleasure to announce the appointment of George Craigie as Council Commissioner for Quebec Council effective immediately.

George joined the scouting movement as a Cub Scout, then Scout, Venturer and finally as a youth leader. The highlight of his time as a youth in Scouting was attending CJ77 in P.E.I., and the many fond memories of Cub and Scout Camps in Nova Scotia. After university, a career that took him to Montreal, and a young family, he enrolled his son in Cubs with the St Thomas a Becket Group in the Montreal West Island Area. Soon after, he was asked to help out, and before long he was back in Scouting as an Assistant Scouter with the Pack. He moved up to Scouts with his son and eventually became the Troop Scouter and then Group Commissioner. He then took on another role as Group Commissioner for Fairview Centennial Group, became Area Commissioner for West Island, and most recently he held the role of DCC Camps and Properties.

Professionally, George has pursued his education and a career in logistics, purchasing and supply chain management. He has held various positions of increasing responsibility in management with McKesson Canada, currently as a Senior Director in Procurement Operations. George is very active in his industry, and professional development, including holding leadership roles with Supply Chain Management Association, and GS1 Canada. He has a passion for boating, and for leisure has been involved as an officer and trainer with the Canadian Power and Sail Squadrons. For relaxation George enjoys camping and spending time in the outdoors with his family.

George can be reached at [email protected].

We welcome George in his new role, working as part of the Council Key 3 to deliver fun, safe Scouting adventures to our members and helping Scouts Canada achieve its 5 priorities.